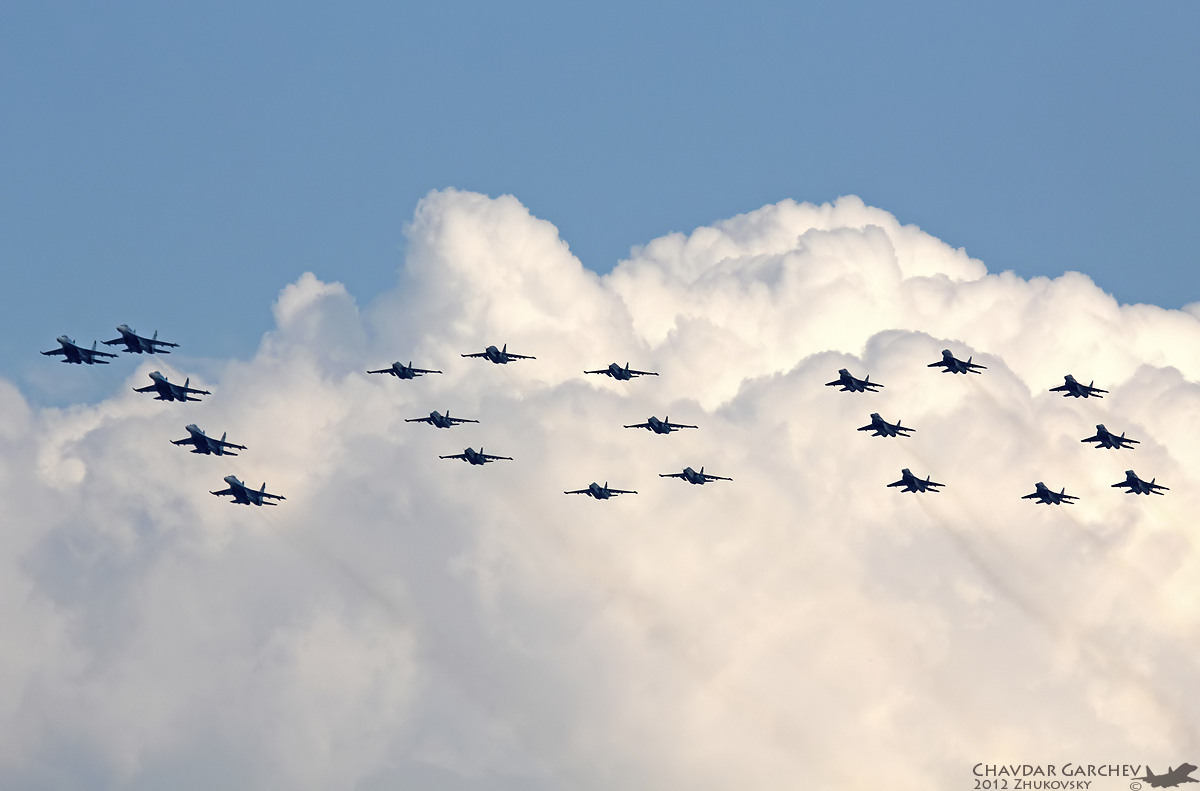 On Aug. 11 and 12, the Russian Air Force celebrated its 100th anniversary with an airshow at Zhukovsky, Moscow. The flying display started with a fantastic tribute to 100 years of the VVS, six Su-25s trailing smoke with the national colours of the Russian Federation followed closely behind by five Su-27s, eight MiG-29s and eight Su-25s which swept across the airfield in an immaculate ‘100’ formation. The flight program consisted of two parts – the Legends of the World’s Aviation, which involves overhauled World War one and two aircraft, and the Common Skies show representing modern combat aircraft.
From there on the show consisted of several flypasts interrupted by displays of show teams and solo aircraft. The flypasts consisted of almost every current type in the Russian air force. The formations where made up in theme’s like bombing, transport ect. They included Tu-22Ms, Tu-95s and Tu-160s from the strategic bomber force, as well as an Ilyushin Il-80 flying command post, A-50 AEW aircraft and newly acquired Su-34s, MiG-29SMTs, Yak-130s and An-140s, as well as Mi-35M, Mi-28N and Ka-52 helicopters.Three Russian aerobatic display teams ,the Swifts with their MiG-29s, Russian Knights  Su-27s; and Golden Eagles, Mi-28Ns were joined by the Red Arrows Hawks from the UK, the Frecce Tricolore MB-339s from Italy, the Finnish Midnight Hawks and the Polish team with their TS-11 Iskra trainers.
The  MiG and Sukhoi  their latest aircraft. The MiG-29M2 4++ generation fighter performed a solo display before joining up with the Sukhoi T-50 fifth generation fighter. Both flew in formation before the public. This was the second prototype of the T-50. And the Sukhoi Su-35 demonstrator 901 gave a stunning performance using extensive vectored thrust.